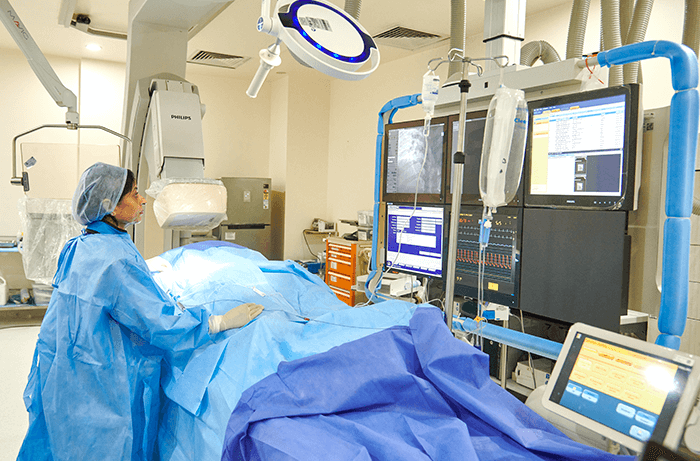 The human mind is a complex web of feelings, ideas, and actions. Similar to how our actions are influenced by electrical signals in the brain. Our incredibly skilled neurologists and neuropsychologists at Manipal Hospitals deal with this unique combination on a regular basis.

In this syndrome, memory, thinking, behaviour, and the capacity to carry out daily tasks all deteriorate. Their capacity for problem-solving and linguistic skills are also impacted. Although dementia primarily affects elderly individuals, it is not thought of as a normal part of ageing.

Our high definition MRI scans at Manipal Hospital identify particular problems in how the brain functions. The second most frequent form of dementia is vascular dementia, which develops as a result of microscopic bleeding and blood artery obstruction in the brain. Given the various forms of dementia in various people, our interdisciplinary team of neurologists, neuropsychologists, and medical counsellors diagnose and individually tailor the optimal course of treatment for each patient. The majority of progressive dementias, such as Alzheimer's disease, have no known cures or treatments that can stop or decrease their growth. Medication, however, may momentarily alleviate problems. Come visit our neurosurgery hospital in India for the best treatment.

Epilepsy is a long-term neurological condition in which aberrant brain activity results in seizures or bouts of strange behaviour, feelings, and occasionally loss of consciousness. It can strike any person. If you experience one or two unprovoked seizures that are not related to another known and treatable medical disease, such as alcohol withdrawal or extremely low blood sugar, you are likely to be diagnosed with epilepsy. Epileptic seizures can occasionally be linked to a history of brain damage or a brain injury in the family.

We use an EEG video telemetry to monitor brain electrical activity, capture a typical seizure or spell, and aid in the epilepsy diagnosis. Our skilled neurologists design the prescription regimen, which consists primarily of anti-epileptic drugs, based on the kind and severity of the epileptic seizures. Surgery is the best option when medications are ineffective at managing epilepsy, given that seizures always start in a single area of the brain and don't affect vital processes like language, sensation, or movement.

A device to cure epilepsy is implanted along with the removal of the area of the brain that produces seizures and the destruction of the nerve pathways that seizure impulses travel through in our team of neurologists and neurosurgeons' most efficient procedure. Book an appointment today at Manipal Hospitals for Neuro-Muscular Diseases treatment in India.

Memory issues, a partial loss of vision, depression or other emotional issues are possible side effects of this kind of surgery. These dangers will differ from person to person and, in certain circumstances, may only be transient. In fact, for some people, epilepsy surgery may even improve their memory and mood.

With the help of our skilled neurologists and neurosurgeons and our accurate diagnosis methods, we have successfully treated more than 5 lakh epilepsy patients.

The brain is the most delicate organ and an open surgery such as the one in epilepsy deserves its fair share of care and protection. This is where our superior quaternary care expertise and stringent infection control norms make an impact on the recovery of our patients.

Mobility issues aren't usually related to orthopaedic issues. Our capacity to move is controlled by the brain; therefore any abnormality in brain activity can impair it.

Our devoted and knowledgeable team of neuroscientists is skilled at identifying and treating the symptoms of a variety of movement disorders. Their expertise spans the spectrum of movement disorders, including Ataxia, which affects the cerebellum, the area of the brain that regulates coordinated movement, Cervical dystonia, which causes your head to tilt forward or backward uncontrollably, Chorea, which results in rapid foot or hand movements akin to dancing, Huttington's disease, a fatal genetic disorder that causes the progressive breakdown of nerve cells in the brain, Parkinson's synd, and others.

Our brains need sleep since they are always active during the day. Lack of sleep can have serious health consequences, including neurological disorders. Insomnia, Sleep Apnea, Restless Leg Syndrome, REM Sleep Behavior Disorder, Narcolepsy, Sleepwalking, Sleep Terrors, and Bruxism are a few of the frequent sleep disorders that require medical guidance and attention (Teeth Grinding).

We offer a dedicated sleep clinic with qualified neuropsychologists and medical counsellors to treat sleep disorders since we recognise the importance of sleep for our health. A number of tests are performed on you, including polysomnography, which measures brain waves, oxygen levels, and body movements while you sleep to determine how they affect your quality of sleep; EEG; and genetic blood tests to identify narcolepsy and other underlying medical conditions that may be contributing to your sleeping issues.

Most of us would have experienced a headache at some point without it having any lasting effects. There are various headaches, though, and not all of them are brought on by gridlock or loud noises. Attention should be paid to headaches that are accompanied by symptoms of the nervous system such visual abnormalities, slurred speech, weakness, numbness, or seizures, as well as symptoms like fever, stiff neck, disorientation, impaired alertness or memory.

A headache is something we take seriously at Manipal Hospitals. especially if we detect a neurological reason beneath the surface. To ascertain the cause, our neurosciences team will subject you to a number of tests, including blood tests, X-rays, and an MRI or CT scan. Ice Pick Headaches, Spinal Headaches following a spinal tap, and Thunderclap Headaches are a few of the uncommon but deadly headaches we find and treat with extreme caution. headaches brought on by blood vessel obstruction, rupture, or tearing Injury to the head, hemorrhagic stroke caused by a burst blood vessel in the brain, ischemic stroke caused by a blocked blood artery in the brain, etc.

This is a long-term auto immune condition that affects the brain, spinal cord, and optic nerves, which causes a number of symptoms throughout the body. It results in myelin sheath inflammation, which damages the sheath and leaves scarring around the nerve fibres that convey electrical signals. They primarily impact the brain stem, the cerebellum, which regulates balance and movement, the spinal cord, the optic nerves, and some brain areas' white matter.

Our Center of Excellence in Neurosciences is home to some of the top neurologists in the world, with experience treating patients with a wide range of neurological conditions, including the complicated disease of multiple sclerosis. Although there is no known cure for MS, doctors can provide effective treatment that can ease symptoms, limit the disease's course, and lessen the frequency and severity of relapses.

Those with diseases, injuries, or abnormalities of the nervous system, including brain and spinal cord injuries, may benefit from neurological rehabilitation, which include techniques to enhance function, lessen symptoms, and enhance wellbeing.

Manipal Hospitals is proud to be the industry leaders in the field of specialised neurological services. Our Acute Neuro Rehabilitation Program was specifically created to assist patients in leading a life that is nearly normal. Our team of neuro experts, which consists of neuro physio therapists who specialise in the examination and treatment of people with movement issues brought on by diseases or injuries of the neurological system, painstakingly developed our variety of rehabilitation facilities and services. They aid in restoring or enhancing mobility to get you moving.