Advances in management of Pancreaticobiliary diseases

Pancreaticobiliary disorders include a group of common but severe ailments which if detected early are potentially treatable. The best example of such diseases is cholangiocarcinoma (CBD cancer). Patients in early stage generally present with stricture with resultant cholestatic jaundice. With the availability of advanced radiological techniques like MRCP and endoscopic procedures like ERCP, these strictures can now easily be dealt with. However, a large proportion of patients remain undetected, and are thus called indeterminate strictures. As a result, either these patients progress to advanced diseases at which curative treatment is not possible; or they have to undergo unnecessary surgery which is associated with morbidity and mortality. Another common biliary disorder is choledocholithiasis (CBD stone) which can now be removed in most cases with ERCP. However, in cases of altered anatomy, large stone or impacted stones, duct clearance is difficult.

Cholangioscopy (Spy glass) is the latest state of the art technique which has allowed for significant improvement in diagnosis and management of biliary diseases. Visit the best gastroenterology hospital in India for these treatments. Cholangioscopy is today most commonly per- formed via the per-oral approach during ERCP, for managing difficult stones, and for evaluating pancreatico- biliary strictures. In the setting of indeterminate biliary strictures, cholangioscopy allows for direct visualization, specifically assessing for endoscopic findings suggestive of malignancy including tumor vessels (i.e., irregularly dilated and tortuous vessels), intraductal nodules or masses, and papillary or villous mucosal projections. This can be combined with targeted biopsies which further increases the diagnostic yield. Recent studies have demonstrated sensitivities ranging from 88% to 100% and specificities ranging from 77% to 92%.

Therapeutic cholangioscopy, on the other hand, is used for the treatment of difficult biliary stones by using intraductal lithotripsy and for palliative therapy of biliary malignancies. A large multicenter registry on the SpyGlass cholangioscopy that uses Electro Hydraulic Lithotripsy or laser lithotripsy demonstrated a stone clearance rate for large bile duct stones of >90%. Consult with the best gastroenterologists in India for the treatment procedures.

We, at Manipal Hospitals, Dwarka, have successfully used Spy glass cholangioscopy in 3 such patients. In first case, a 68 year old gentleman, a known diabetic, recently detected cirrhosis with portal hypertension with large esophageal varices, presented with complaint of intermittent low to moderate grade fever off and on from last 7-8 months, associated with pain abdomen, loss of appetite, weight loss, generalised weakness and gradually progressive distention of abdomen. He was evaluated and found to have multiple large impacted CBD stones. ERCP was done and stent was placed but stent could not be removed. Thus, spyglass cholangioscopy was used and direct vision, impacted calculi were broken using Electrohydraulic Lithotripsy and entire CBD was cleared using it. Patient was discharged very next day and doing very well on follow up.

Remaining two cases were of a 69 years old female patient and a 50 years old gentleman. Both these patients had a history of cholestatic jaundice outside for which ERCP with biliary stenting was done outside. CECT Abdomen was done which showed focal CBD wall irregular thickening and enhancement in the mid distal portion with proximal bilobar IHBR. Bile cytology and lower CBD brush cytology was negative for malignancy. CA19.9 was inconclusive. The patient improved symptomatically with stenting, but the nature of the stricture was not confirmed. There was a dilemma whether this was malignant and regarding the need for Whipple's surgery, which in itself is associated with morbidity. The patient was thus, taken up for spyglass cholangioscopy in which no definite mass or nodule or increased vascularity was seen. In one of the cases, the papillary projection was seen. A targeted biopsy was taken from the suspected area which showed only inflammation with no dysplasia. Both the patients are thus kept on follow up and are doing well. 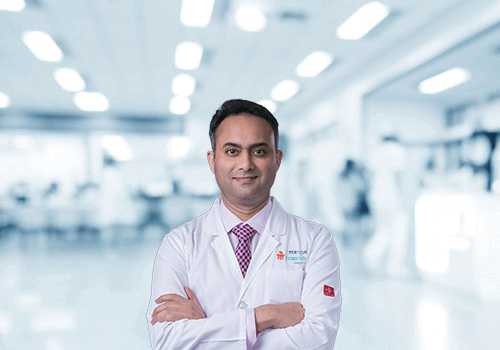